Singer guitarist Didier Casnati (original founder, still performing today and manager of the band) used to be found playing restaurants and town squares. In 2000 a busking duo was formed in a flower market in Nice, France. Due to the popularity of the band, and in a short space of time, more and more more musicians joined the busking sessions, and soon the duo became a 5-piece acoustic pop band – now famous with their Beach Boys, The Beatles and Eagles influenced vocals. 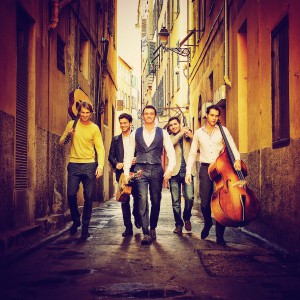 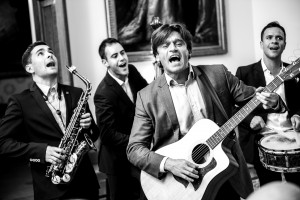 Signed to Universal, in 2012 the band released its debut album The Gypsey Queens with London Records, and in 2014 the band released their second album Lost in the music, produced by lead singer Didier Casnati.

The band tour the World all year-round, known for performing 200 private bookings from the 600 or so exclusive engagements offered, each year! They have played for 51 heads of State, and amongst a huge list of celebrities, millionaires and World leaders including Elton John, Rod Steward, David Beckham, Jean Paul Gaultier, Nikolas Sarkozy and Vladimir Putin. Jokingly, founder member Didier describes the band as “the most famous band you have never heard of”.

The band delivers a performance whereby they are so comfortable getting amongst their audience, singing to/with/at them, in a uniquely energetic, dynamic, and ultra charming way. The set-list is huge. “We don’t play the hits of today necessarily, we reach back to songs people might not even know they wanted to hear”.

SOLE Agency were lucky enough to meet up and work with the Gypsy Queens twice during 2016. The first providing the AV for them at the notorious Cartier International Dubai Polo Challenge, Desert Palm Resort, Dubai and the second just a few days later at the intimate La Petite Maison in Dubai! There is always room for a third, and SOLE Agency are working hard to try and bring this fantastic band back very soon in the future – perhaps even to your next event!