Posted at 14:29h in A Conversation With by Adam 0 Comments
0 Likes 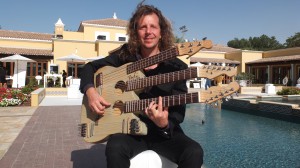 Every once in a while a guitar player comes along who quite frankly blows us away. While personally I do not play the guitar that does not mean I can’t have some of my very own guitar heroes. The thing we love about the guitar and great guitarists is the versatility of the instrument and the players. Many would argue that Slash is one of the world’s best guitar players but having said that the same number people would argue that Eric Clapton is a guitar great. We love all styles of the guitar whether it is Flamenco, Jazz, Rhythm and Blues, Rock, Pop, Metal and more. What makes a guitar player great is the he can make his sound unique. 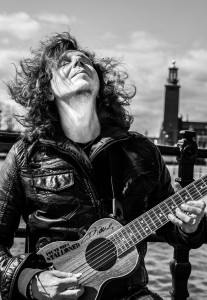 This week our conversation with feature, is with a guitarist new to the Dubai scene.Eugenio Jedi Martinez is a contemporary world music multi instrumental artist, composer and entertainer.

His solo show is a modern version of one man band based on instrumental acoustic melodic guitar music performed on nylon string guitar(s) and stringed instruments (bouzuki, sitar, mandolin, ukulele, etc) including a short size soprano guitar, a 21 string harp guitar and last but not least a 3 neck harp guitar with 25 strings. He is a live looping artist performing and creating live music in front of the audience with (no pre-recorded backing tracks) his own rhythm guitar harmonies and chord progressions. On occasions he adds beats, drum and hand percussion sounds using different electronic percussion & drum pads to create a fuller sound (one man band).

He is a contemporary world music multi-instrumentalist, composer, and entertainer. As we mentioned above we love the versatility of the guitar, and we think Eugenio is a guitar great.

Contact us at SOLE Agency, for further details about booking Eugenio. 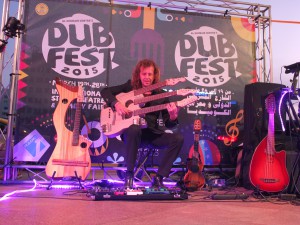 When and why did you start performing?

I started performing at the age of 17 ,few months after I started playing the guitar and bass guitar on my own, without having any sort of previous music training.

Which instruments do you play?

Guitar is my main instrument, besides that I play different other strings instruments as mandolin, bouzouki, oud and different variations in different tunings of the above plus a couple of hand percussion instruments such as darabuka, congas, bongos, djembe, etc.

What was the first song(s) you learned?

I first started tuning the guitar and being able to integrate a whole bunge of chords ,chops, riffs, scales and melodies together into different compositions before expressing any interest of learning somebody else’s songs, however after discovering Jimmy Hendrix ,AC/DC ,Metallica it opened the doors of guitar enlightment to me and brought out a lot of interest in learning other people music. If it rocks of course ha ha!

Which famous musicians do you admire?

Because of their legacy, inspiration and contribution of the music evolution worldwide.

My first instrument was an unplayable and un-tunable guitar (I loved it), It made me strong, I will never forget it!

What are your fondest musical memories? In your house? In your neighbourhood or town?

The day Paco De Lucia came out of a restaurant where he was having dinner with his wife and children to watch one of my street shows. When I noticed him in the crowd staring at me with a big smile on his face, I was actually playing one of his most famous compositions Entre Dos Aguas I felt small, like a kid in front of the teacher and I wanted to stop. He felt my hesitation and he said “Go on, you are BLEEP good ” I ended up the song really well 😉 and then he came straight to me and we start talking like we had known each other forever. I told him ” I always wanted to come to see one of your concerts ,I cannot believe you just showing up at my show instead ” He invited me to join him at the restaurant, we had really some amazing conversations about life and music. We hung out and became friends. I will never forget that day and definitely will never forget Paco, as a person, a friend and major Worldwide inspiration. He will live forever in people hearts and in mine ,for as long I breathe.

Were you influenced by old records? Which ones ?

Friday Night In San Francisco -Al di Meola,Paco De Lucia,John McLaughlin ..and so many others

Who are your favourite musicians?

The ones that play with the heart and touch the soul.

I never practice, I don’t do exercises. I think of something and I feel something then I close my eyes and the fingers just go. If any music piece, riff, etc. tells me something, touches my heart and is naturally compatible with my playing style then I take it very easy and incorporate it in my playlists as one piece of my own.

I also dj, the skill of being a dj does not come to me as naturally as playing music. In the same time it is great fun and the way I do it involves a lot of creativity.

I am currently working on a new big show – ‘stadium rocking concept’ in which I am blending my DJing skills together with the ability to play live music instruments at the same time while I am actually DJing.

As much I can spin any playlist or music genre especially when it comes to play in clubs and venues for example. I personally love good trance and rave music and the combination with hot guitar licks on top of the tracks, live mixes and re-mixes defines my new concept.

How do you balance your music with other obligations –friends/family etc?

I spend a lot of time with my wife for example when I am not performing and we live a very simple, close to the nature way of life.

Here at SOLE Agency, we have had the pleasure working with Eugenio on a wide variety of gigs. He has played at venues such as 360 at Jumeirah Beach Hotel, Zabeel Sary Hotel on The Palm, Al Ghurair Centre, Private parties and wedding events. 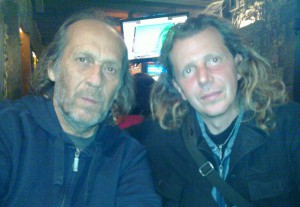